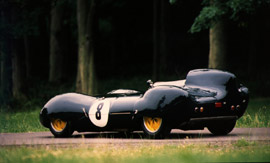 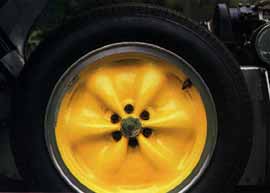 Close-up of a Wobbly Web Wheel 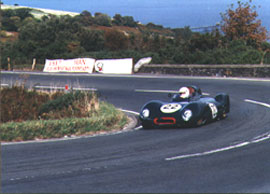 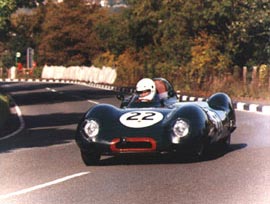 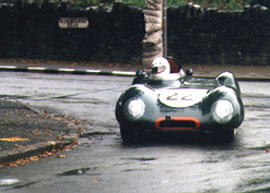 This Lotus Eleven is one of the highly successful cars developed during the 1950s by Colin Chapman. Colin's original inspiration and his first performance car was based on the amazing Austin Seven.

Many famous racing drivers such as Graham Hill, Roy Salvadori, Mike Hawthorn, Innes Ireland, Cliff Allison and Alan Stacey all drove early Lotus Cars, the Eleven particular. In fact you can read about Alan Stacey's very car on this site!

Even the great 1963 World Champion Jim Clark, raced against this Lotus Eleven; at Charterhall in 1961 - to read more click the Charterhall button above.

Enjoy learning of my involvement with these fabulous Colin Chapman/Frank Costin designed and built cars. At Monza the legendary Team Lotus with Stirling Moss achieved 143 miles in an hour  - an amazing record!

Lotus Eleven as the most successful sports racing car during the mid-late 1950s was primarily meant to compete in the 1100 cc class. Starting from 1956 to 1958, Lotus 11 series were built in several versions where the later versions sometimes are referred to as Lotus 13.

Car racing is one of the oldest forms of competition in the world. As soon as the cars were invented, many people were willing to watch races. Following this desire came racers, and then bettors. Betting on racing events can be really exciting. Whether you have chosen the UK or the US online casino, you probably know that racing is not the most popular form of sports betting, even though you will always be able to place a bet available for the most prominent series. If you are new at betting on races, and by doing that you want to win real money, you should know that there are various types of racing bets, including placing bets on classic Lotus races. Since racing is not a team sport, but an individual sport, you are betting simply on which driver will finish in a better position. It looks easy, but placing bets on an actual winner is very difficult to do.

I'm John Gray and I restored this particular Lotus Eleven between 1982/5. For the last 24 years I and trusted friends [Don Hands, Martin Ricketts, Simon Braithwaite and Chris Alford] have raced the car both in the UK and Europe.  I have had great fun on circuits such as Brands Hatch, Donington, Mallory Park, Oulton Park, Crystal Palace, Silverstone, Snetterton and Thruxton. In Europe the car has raced at Spa, Nogaro, Nurburgring and LeMans.

The car has also been up famous hillclimbs such as Prescott, Shelsey Walsh, Wiscombe Park and Etretat in France, so it is a really versatile race car.

Please explore Lotusracer and send me details on your car  - I'd be very interested to receive your comments. Please email them to:

A fantastic weekend was had over 26/28 September at the wonderful Spa Francorchamps track. I entered the car in two half hour races, I drove in one and my great friend Don Hands drove in the second. We have a great DVD of the meeting shot by Steve Henderson. If you would like a copy please email me. For now however, please copy and paste these two links to 'YouTube', where you will see all about our great weekend racing at the fabulous Spa Francorchamps Circuit.

The car was on display at the Silverstone Classic Weekend. Pictures will follow.

Lotus Eleven Found
A 1957 Lotus S2 LeMans version. It's been in storage since Nov 1972. It's complete minus the engine. I've already been in contact with the Historic Lotus Register. Vic ( UK ) Jay (US) . The are working on determining which one this is. The number plate is long since gone:
Read More...

2002 Race Report
The chance of a lifetime, to be able to race the Eleven on the famous 'Circuit de Sarthe', a dream come true!
Read More...

Shelsey Walsh
My conversation with David Abbott about John Gray and his Lotus Eleven in early July 2004 went something like this……
Read More...

Bentley Drivers Club, Silverstone, 11 June
What a super meeting this is! Without doubt, one of the very best in the ‘Club' calendar. The mix of cars is always excellent and each race is in the true spirit of a sporting event.
Read More...